There are people who practice a lot and don’t improve much, while others seem to practice half as much progress quickly. What’s their secret? How are they different? What are you? Well, ruling out the exception of superhuman music prodigies, the latter are the ones who how to practice effectively.

We'll explain two methods of learning that were derived from studying how the human brain works. These are proven methods that utilize your brain's strengths. When you learn to work with your brain, you’ll find results come smoothly and without (as much of) a fight!

Spaced Repetition is a proven learning technique that works with your brain to most effectively learn something with minimal effort. Basically, you space out your repetitions (explains the name, right?) in increasing intervals so that it stays encoded in your long-term memory. This is quite the opposite of things like last-minute cramming, where you try to stretch your brain’s capacity in a short period of time and not really retain much thereafter (i.e. you didn't learn). So if you've still got time until your big recital or competition date, plan ahead and utilize this technique! If you came here looking for a way to cram... Best of luck to ya, is all I can say.

Before I explain what Spaced Repetition is, I have to explain an important component of it: the Forgetting Curve. In 1885, a man named Hermann Ebbinghaus found that the number of items people could recall from a list decreased exponentially over time. In the first hour, they would forget a whopping 40-50% of the list. In the following 23 hours, they would lose another 20%. As the days go on, the percentage of stuff forgotten got smaller and smaller. Basically, most of everything you’re going to forget goes in the first hour.

This is where Spaced Repetition comes in. In a nutshell, it’s basically not letting your brain forget something. Ebbinghaus found that repeating a task over time was incredibly more effective than repeating it the same number of times at once. Spaced repetition follows the Forgetting Curve so that every time you forget a little bit, you repeat it. Every time you repeat it, it increases the interval you need before the next repetition. So, in the beginning (when you quickly lose 40-50% of what you learned) you would repeat more often. Then, as time goes on, you’ve repeated it a couple times and you’re also bound to forget less - so you can space out your repetitions much more. Here’s a helpful visual (original image source here): 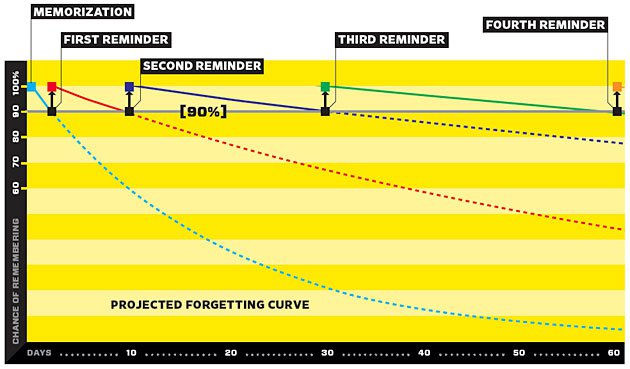 An example of putting this to use in music practice

Say you want to memorize a section of a piece. First of all, don’t just read it off of the sheet music over and over. That doesn’t force you to memorize. Turn the sheet music over and only take a look when necessary. You’ll probably find that the parts you have to peek at the music for are consistent, just like how there are some flashcards that are harder to memorize than others. Isolate those sections even further and memorize those. Then, weave them back into the whole section. Now, maybe you can play the whole section from memory pretty well. So you put it down and you go to sleep (which we'll explain in the next section!).

The next morning (maybe it’s been 12 hours), you attempt to play it from memory. It’s not as fresh as when you had been repeatedly playing through each section the previous day, but you’ve actually retained a lot. You practice until you’re able to play through the whole thing again - and this time, this comes a lot faster.

Then you continue spacing out your repetitions farther and farther apart. Now on to the following day after that: you’ve waited a full 24 hours to the third day. You do this again. You find you can play it pretty much perfectly, with a few misses here and there. You clean those up.

2 days after that. You’ve memorized it - only missed one spot.

5 days later, another repetition… And then a week, 2 weeks, a month apart.

At this point, it’s bound to be perfect. But by spacing apart your repetitions, your brain encodes it further and more solidly into your long-term memory - basically saying, “Oh right! This is important. I’ve got to keep this,” and, “I’m seeing this a lot, so it must be important”. This guarantees that you truly learn it and it’s firmly in your repertoire, ready for you to pull out at any time.

Sleeping plays a big role in memory consolidation (basically, when memories are strengthened in your brain) which, needless to say, is important for learning. Although you may be inactive during sleep, your brain certainly is not. In short, sleep is when your brain takes in all that it experienced that day and makes sense of it, organizes it, and decides what stays and what goes. Without sleep (or without enough of it), your neurons either don’t get the opportunity to or are too tired to coordinate and make necessary connections.

Losing sleep practicing doesn’t do you any good! It’s more likely you won’t retain what you learned that day nor have the mental capability to reproduce your results the following day (let alone learn a new section). If you want to really learn something (like getting that difficult section under your fingers) - you have to utilize sleep! Remember, whether it’s memorizing a piece or trying to get something into muscle memory - it all happens in your brain.

Shorts naps are better than nothing, but obviously, getting your full 7-8 hours is the best remedy. A German study found that even a 6 minute nap helped with a memory task (although longer naps helped more). The study suggests that the mere onset of sleep can activate the consolidation processes, the effects of which continue to linger even after waking.

So - don’t power through sections with a “I’m not going to rest until I can play this!” mindset. Instead, do rest! Let what you’ve worked on sink in and let the connections be formed and let your brain make the connections to your muscles while you sleep. So many times I’d go to bed frustrated, unable to play a certain section of a piece. My fingers just weren’t learning, even with careful and numerous repetitions. But when I woke up in the morning and tried again - voilà! It was like magic. When did I learn this? I would think. I wasn’t able to play it last night. Well, this explains it - and it works.

We work best when our brain is happy! Learning how your brain works will help you to work with it to produce the best results - without pulling out your hair, gnawing off your fingernails, and/or sobbing in a corner during your second consecutive all-nighter. Of course, there are times when cramming is necessary...While that can be effective for the short-term, if you want to retain something - use proven techniques like spaced repetition!

How does Better Practice work in schools? We asked one of our high school band teachers a few questions on how it worked for them in a schoo……

6 Great Ways to Motivate Your Students Throughout the Year

As the next academic year looms ever closer, it might be a good idea to start thinking of the types of activities you can plan to inspire an……