If you love music and have a passion for inspiring and motivating others, you might be looking into becoming a music teacher. After all, a music teacher was most likely the one that set you on this path! Whether you’re aiming to be a music teacher at a school or to own a private studio, here are some things to focus on:

If you’re reading this, chances are you already have an instrument of choice and have put countless hours into it. But it’s important to realize that in order to become a teacher, you need to be able to understand the music versus being able to perform it well. You don’t have to be a world class performer in order to be a good teacher, and vice versa. I believe that while a performer and teacher can masterfully play the same instrument, the skills and personalities needed for each respective career is very different. In some cases, great natural performers won't have the same penchant for teaching - because when music comes so naturally to them, they struggle to explain it to someone else!

It ultimately comes down to what you want out of music - and if that is to teach, then understanding music theory, each instrument (if you want to teach in a school), and being able to communicate concepts effectively are very important. “But how do I learn all of that?” I can hear you asking. 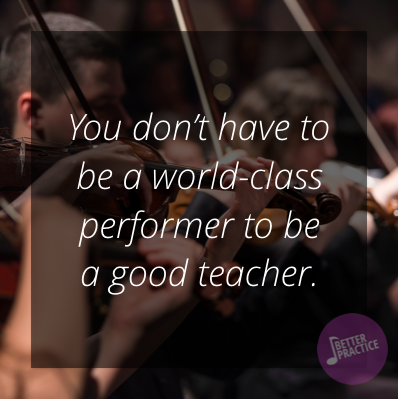 One possible path is attending college and majoring in your instrument or Music Education. Not everyone goes down this path, and the cons are that it can be very pricey and takes a lot of time. However, you’ll have the chance to learn from and work with professors and artists that you admire, make connections (very important!), and build your chops! Often times, higher degrees also mean higher pay, especially when you are teaching in a commercial studio or school system.

If your goal is to teach in the public/private school system: Some people choose to major in Music Education as a way to learn what they need to become a music teacher. Although it’s not a necessary step for many music educators, it is sometimes required, especially when teaching in school districts. Often times people will take this major side-by-side with a focus, such as Conducting or an instrument. These programs typically span 2-4 years and teach you everything from a rudimentary understanding of each woodwind and brass instrument, music theory, conducting, and much more. Some Universities require their Music Ed. majors to march in their school’s marching band (if they have one) for a few semesters so they understand how to lead and be a part of an on-field unit, something that most high schools have.

Music Education programs can also require student teaching. For two semesters (though that number varies depending on where you are) you teach under a master teacher at a local school, working directly with the students of the music program. For many, this is the most terrifying part. After all, it’s one thing to sit in a classroom and learn how to play the clarinet for a week but it’s another thing entirely to help a struggling student learn how to play that same instrument. This aspect of the Music Ed. major is easily the most helpful, though. I’ve worked under several student teachers in my youth and worked alongside several as an educator myself and though they all start young and are usually a bit unsure of themselves, nine times out of ten they come into their own and flourish in the environment. By the end of the semester, not only have they grown a lot (thanks to the practical application of what they’ve been learning), but the students are sad to see them go because of the bond they’ve formed. They say you don’t really know something until you can teach it, and this environment gives those with the goal of becoming a music teacher an opportunity to really use what they’ve been learning and get their first taste of teaching others.

If your goal is to teach at a private/commercial music studio: You should major in your instrument as opposed to music ed, but you can always double major or minor if you can handle the workload! This allows you to master your instrument, which is preferable over a music education degree, which covers many instruments and aspects that you might not necessarily need to teach. For teaching experience, there are many groups and organizations of teachers who get together to share education ideas, as well as conventions and meetings (there will most likely be music teacher organizations in your local area!). Often college campuses have student music teacher organizations as well. You can also ask to shadow teachers, including their prep time!

If your goal is to teach in the public/private school system: If you’re trying to break into public education, taking part-time music jobs within school districts is a good way to get your name recognized. If a district removed from your preferred workplace has an opening for a position, you should definitely take it, especially if it’s full time. A director I know very well taught at three different schools before he became the full time director for the school he’s at now (a place he’s been for eight years now).

If your goal is to teach at a private/commercial music studio: If your goal is to become an established studio teacher in the area, making sure you have a strong appeal to students in a competitive market is essential. One of the ways you can do that is by increasing the strength of your online presence and through testimonials from satisfied students and families. Making your studio stand out by using an app like Better Practice works too, especially when you’re seen as more modern and connected! You might even consider performing in the area, drawing the eyes of young students and families who are musically inclined and seeking lessons. Whatever your goal, the way you accomplish it remains the same: make yourself as well known as possible and gain a strong, positive foundation to stand on when you present yourself. 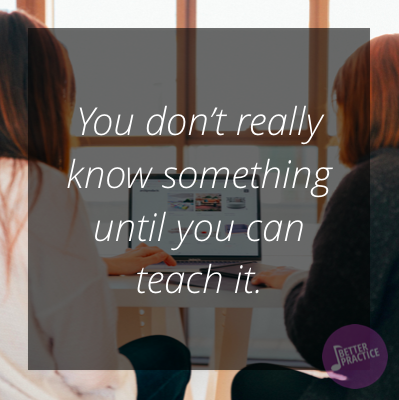 4. Never Stop Being a Student

As many of us in education know, you never really stop learning. Just because you’re comfortable enough to teach the subject you excel in, that doesn’t mean you know everything! I still find myself learning new information all the time, even musical knowledge. Though music theory is finite, there are hundreds if not thousands of mindsets and approaches to teaching and performing music that you can never truly know all of them. Just like the world around us, music education continues to evolve and transform with each new iteration of technology and each new generation of students. Being able to adapt and be creative with your teaching methods is what keeps you successful and employable while still allowing you the chance to grow both as an educator and as a person. With the advent of constantly accessible technology, embracing music practice tools and apps is becoming less of an option and more of a necessity. Being willing and able to adapt to the changes that happen around you is a great thing! Whether you’ve taught for 5 years or 50, you’ll keep learning something new to keep you engaged and excited to wake up and continue teaching every day.

Better Practice can keep you learning new ways to approach music education as well as increase the effectiveness of your teaching.

Making a Living as a Musician

Turning music into a sustaining career has always been seen as a challenge. From the stereotype of the “starving artist,” to the stigma of a……

Scheduling Your Time as a Teenage Music Student

It’s no secret - students today lead far more hectic lives than they did twenty or even ten years ago. More and more teenage students find t……