There’s one golden rule of practice I tell all of my students: fast is slow, and slow is fast. Meaning - fast practice is slow progress and slow practice is fast progress. But what do I mean by ‘fast’ or ‘slow’ practice?

There was a certain habit I saw a lot of my students had when they hit a problem section in their piece. When I ask students to play their piece for me in lesson, they go about doing so, doing relatively okay - until they hit a bump in the road. And (I know all of you teachers are very familiar with what I’m about to say next!) when they reach this bump or problem area, they will try to speed through it. If it falls apart or they stop, they immediately try again and, again, try to speed through it. As if moving faster would somehow make their errors unnoticeable to me!

One day, I had an opportunity to observe a student practicing at home and found she was practicing through parts with the same ‘rushing’ actions as the run-through in lessons! I watched as she repeatedly looped a difficult phrase at the same tempo, fraught with mistakes. She would eventually get faster and faster, with an almost frustrating sense of urgency to get it correct and move on. It was like she expected the phrase to be in this tempo, so she would attempt it at that tempo until her fingers just so happened to grab the right notes and then move on.

And then it made sense - students would rush through parts during lesson because that’s how they had practiced it - and they had somewhat grabbed the right notes on a couple of occasions so they expected it could happen again in lesson.

Pure repetition and finding the notes by luck isn't an efficient way to practice - so I grabbed a metronome, sat her down, and taught her this 2 Up 2 Down Game.

Now I think you have an understanding of what I mean by ‘fast’ and ‘slow’ practice. When someone practices a phrase too fast and they make errors in their repetition, they are essentially teaching their fingers the wrong phrase (if the error is the same every time) or nothing at all (if it’s just all over the place). Every time you repeat a phrase wrong, you are learning it wrong.

Yeah, it would be awesome if you could get it at the right tempo the first time around. But if you’re advancing - which means you’re learning songs that you can’t play right away - then you’re going to have to take it slow at first.

Researchers at the University of Texas found that the most efficient practicers all “utilized a variety of error-correction methods, but there was one strategy that seemed to be the most impactful: slowing things down.” 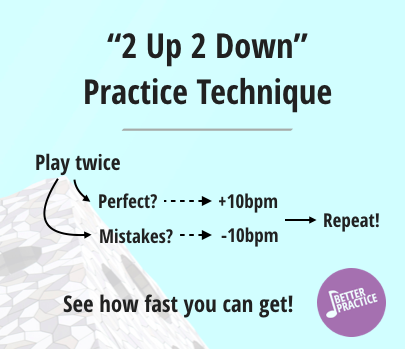 The main point of 2 Up 2 Down is to take the difficult phrase at a speed where you can play without errors - which means none! Zero! No slowing down, no fumbling, no stopping and starting over. Just you, the clicks of the metronome, and the phrase played perfectly and easily through. This might mean you have to slow it down (most of the time way down) but not to worry - if you follow this technique, you could increase the tempo up by even 100 bpm in a few minutes.

So you drop the tempo to where you’re comfortable. If you can play it twice through with no errors at all, then you bump up the bpm by 10. And repeat. If you make an error, however small, you have to bump it back down by 10bpm - because your hands aren’t ready for that speed yet (and remember, we don’t want our fingers to be learning the wrong thing). And then the cycle continues. It's a game, so keep doing this and see how fast you can get!

Now, the second rule of this is that you have to try to keep the momentum going. Not playing it through at one speed, texting a little bit, playing it again, fumbling with the metronome, etc. You don’t want to give your fingers a chance to unlearn themselves. Also, when the brain feels a sense of urgency and is forced to react quickly, it learns things much faster and more efficiently.

Traditional metronomes will work, but this is where Better Practice can really help. On the practice screen, you can open up a built-in metronome that was designed to support this technique of learning. That is, you can move the tempo up or down by 10bpm just by tapping on the right or left of the screen. So now, you can keep moving up or down accordingly with virtually no breaks in between. This really locks in focus and makes it so your brain has to learn it to keep up. Here’s an example of one of our students practicing this way (her first day using this technique) - look at how quickly she gets the speed up by over 100bpm!

Better Practice also remembers the tempo at which you last finished for each assignment, so you can begin again the next day starting from where you left off.

And just for fun, here’s a scene from the movie The Red Violin demonstrating the same concept (sorta) but over a span of many days (except this kid is a prodigy and just plays the whole piece through). Watch to see the practice:

Remember, fast is slow and slow is fast. Younger students especially don’t have that sense of the long-term and often attempt to get things immediately. Make sure your students learn why slowing down is important, and teach them practice games like 2 Up 2 Down to help keep them in check at home!

No one likes fumbling with the metronome knob or stopping to type in a tempo in metronome apps. If you want to see all of Better Practice’s built-in practice tools like the metronome that moves faster or slower with just a tap, go to betterpracticeapp.com. We make practice easy so lesson time can focus on moving forward.

What does 200 consecutive days of practice look like? We wanted to take time this week to celebrate a Better Practice student, Meryl, who r……

I often have those “Aha!” moments (or “Duh!” moments) where I think of the perfect assignment for a student to work on, or I realize I forgo……